Windows 10’s recently released free windows anniversary update called version of 1607. While it is one of the highly recommended updates which has been rolling out from August, you can download an up-to-date Windows 10’s ISO using this guide to perform a manual update or clean windows ten installation. This best music player application article first appears on androidtrending.

Windows Media Player / Groove
Both music programs come pre-installed in Windows 10, so off the chances that you want any other music player for daily basic, use any of our favorite music apps. Here we are talking about top music player for Windows 10. Though the works with any Windows version. (Let’s not mention older windows)

Let’s start the drill down, To help you find a media player With which you should spend your whole life. At the bottom of this page, we’ve compared music players regarding RAM usage and performance wise.

Why XION is Best Music Player

This music player can play all sorts of audio file formats and is very lightweight to play faster compared to other music apps. Talking about customization, this supports custom skins available at their website. You can make changes to the audio output as if you want to convert stereo to mono or compress output you can do that all. It supports crossfade which you can increase or decrease from setting, so you won’t feel the rough change when you change tracks. The UI is straightforward and customizable with some option to change its window size, transparency.


IF you don’t want to shift through numerous music players, I’ll suggest going with Xion media player, and I will go outside eating my hat if you can’t make XION work the way you want it to.

TIP: You can pin the player to the taskbar to load it in a jiffy when launching the application after closing it will continue playing from last seek position. That’s a great feature you may not find elsewhere.

Winamp broke thousands of its user’s heart and discontinued entirely and stated that no support or further update would be made. However, there is a good chance for Winamp to make a comeback soon, As for now, it is in the under construction as the new owner want to remove all the Nullsoft integration from the software package. It’s unclear that at what point they will realize the latest build of Winamp. However, you can download the last build of Winamp here.

The last version is 5.66 which you can still download from filehippo, and you know that dead application should be used if they are useful. 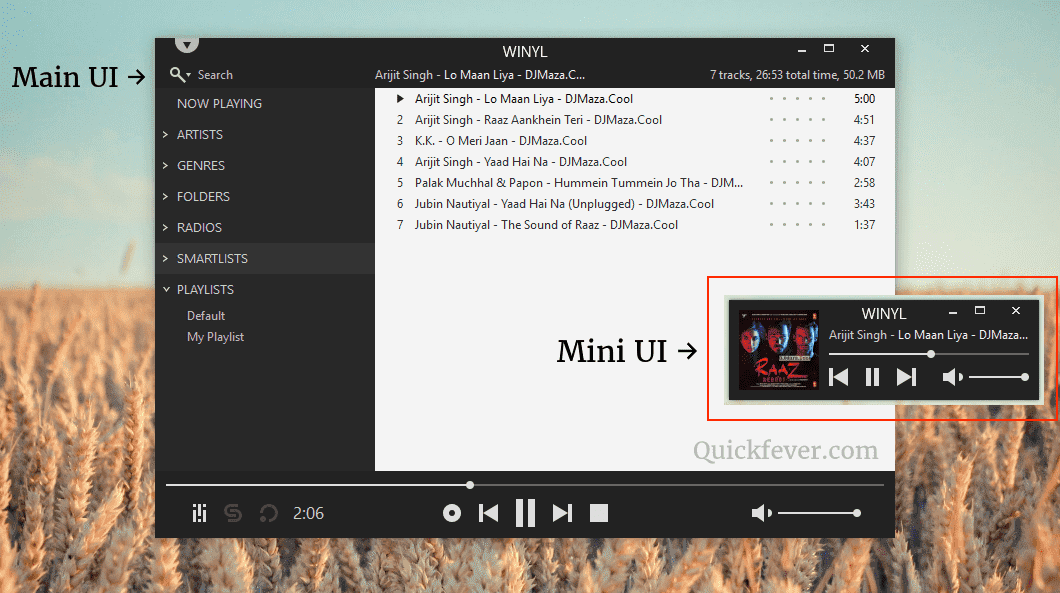 Vinyl: A lightweight media player for Windows has a big interface when you install and launch it for the first time, however, if you like a tiny user interface double click on its header area. If you are concerned about minimum computer resources usage, Vinyl is a thumb up.

Apart from having ability to sorts of media files it has Playlist and-and
It also has some pre-loaded skins and Itunes skin, and it feels good.

Foobar is blessed with lots of features and if you want a player to do things more than just playing songs while being a lightweight program which uses less RAM you can try Foobar.

RAM: Talking about RAM usage all three players occupies very less RAM, but XION was fantastic and was only holding 5MB at the test. Also as we’re using these to listen to music, so when they are minimized, the RAM occupation will further decrease. 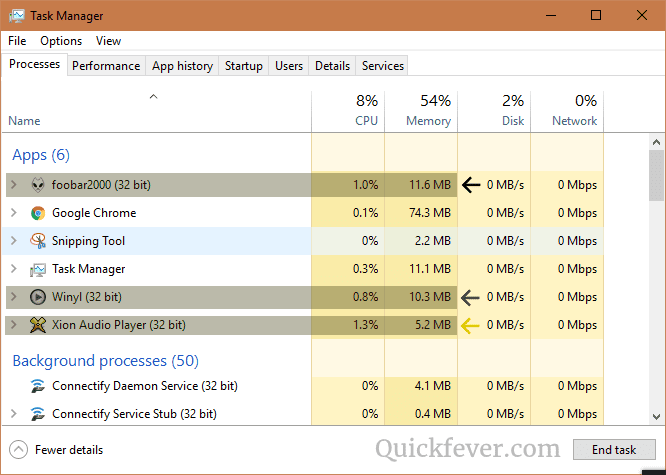 Itunes, in reality, should not be on this list. But If you have any Apple device you can use it as a music player application. Along with it, you can also transfer tracks from iOS device to a computer. Itunes was previously only available for the product of Apple but has now expanded support for other platforms as it’s now available for Windows computers. Itunes interface is very easy to do whatever it is just a matter of a click or two. But iTunes is not in any sense a lightweight application.

Due to the important iTunes alternative applications, there is no pressure to use Itunes for transfer songs to computer.  These are the top 10 iTunes Alternatives. Many people have an enormous pool of offline songs, and any mentioned music player will work best for them. Because you know, having an offline music library is better than listening songs online even according to your mood. Did you discover best music player for your computer? Or have something to share with us. Shout in the comment section below.

Windows Desktop Sidebar and Gadgets for Windows 10 Since Windows, 7 people

Redmi 2/Prime Lollipop MIUI 9 ROM is released for all