[Updated] How Much Does Netflix Cost For a Month? (January 2019)

Netflix is undoubtedly one globally popular streaming service, with lot’s of content to search and binge watch. We’ve…
Devendra Meena

Netflix is undoubtedly one globally popular streaming service, with lot’s of content to search and binge watch. We’ve compared it with Hulu (read review) and found no significant drawbacks in it. Netflix is available for Major platforms including Android TV, PC mobile phones, iOS devices, PS4, etc. It has around 100 million subscribers worldwide, in 2016 Netflix released 106 original series or movies which are higher than any other streaming service provider, it is enough to tell you how popular Netflix is today.

The subscription model of Netflix is pretty straightforward, and there are many reasons to love this streaming service, and we’ll tell you more about it, want to know how much Netflix cost in a month? Yearly? Keep reading.

How much will Netflix Cost for a month?

Well, This is official pricing in INR (Indian Rupee) taken from the Netflix India site. The original pricing is in USD (united states dollar) which is $7.99, $10.99, $13.99 respectively.

Price is increased, $1 for the standard plan and $2 for premium plan. 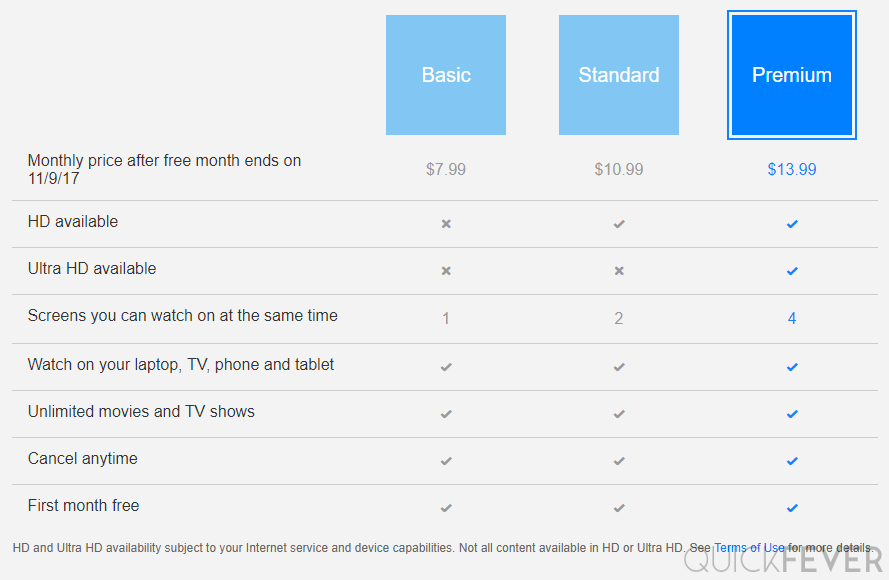 Apart from streaming quality and number of screens, you will get almost same features in each plan of Netflix. Basically, Netflix has three plans which offer different features at different prices.

Hulu: Cost around same but only offers 1-week trial.

How much will Netflix Cost for a year?

So that’s all you wanted to know, the basic price of Netflix is $8 a month and additional ($2-$4) to get more screens to stream and Ultra HD quality.